Talk about a press pass. Named one of the four comics to watch by The Washington Post and one of the best local standup comics in the city by CBS DC, Reggie’s name is hitting major publications—as he hits the streets with a relentless drive to make it rain in stand-up. 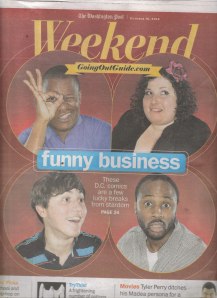 Washington Post (Weekend Going Out Guide)
FUNNY BUSINESS: Could These Four Comics be the Next Big Thing?

“’Mr. Melbrough,’ as his students at Duke Ellington School of the Arts know him, is the 20-something teacher we all had whose other life began as soon as the bell rang. After class, Reggie Melbrough’s life revolves, night after night, around pursuing his dream of being a stand-up comic.”
Read on»

“When you think of places for great comedy, Boise is probably one of the last places the comes to mind. Current DC resident, and Boise, Idaho native Reggie Melbrough is looking to prove that Boiseans can make you laugh too. Melbrough got the calling for stand up after the death of his grandmother and believes that laughter is essential especially during times of sadness.”
Read on»

“What D.C. offered him was community, culture and a place with more opportunities to hone and practice his comedy. But Melbrough still likes to bring the funny home, and this is the second year he has done his Generation Me Comedy Tour in Boise.”
Read on»

WRITING A STORY?
Get in touch with Reggie for a behind-the-scenes look at making a real go of comedy in the nation’s Capitol.